Lonsa was established in 2004 and has a multi-jurisdictional and sectoral track record of concluding complex corporate transactions. Lonsa’s principals have unrivalled experience and knowledge of working with diverse businesses gained by investing in excess of USD$2.5 billion in the Continent over the past 17 years. Lonsa is incorporated in Mauritius. Lonsa has two focusses: Lonsa Advisory and Lonsa Capital

Robin is the Chairman of Lonsa Group Limited. Robin is also the former Chairman of the National Social Security Authority of Zimbabwe and First Mutual Wealth (Private) Limited, institutions with over US$2.2billion and US$350-million of assets under management respectively.

A professionally-qualified and experienced Investment Banker, Robin is Fellow of both the Institute of Chartered Accountants in England and Wales (ICAEW) and the UK Chartered Securities Institute. Robin was appointed to the ICAEW Member’s Advisory Board for Africa in 2016.

Robin was named the Megafeast Business Leader of the Year in Zimbabwe in 2017.

Robin is also a member of the Institute of Directors in Southern Africa and was past Patron of the African Institute of Petroleum. Robin is a former appointed consultant to the World Bank, IFC and Sanlam Investment Managers in Swaziland.

He has a proven track record of leading and closing corporate and investment related transactions in Sub-Saharan Africa and the City of London.

Robin has been instrumental in power, energy and Oil and Gas projects in Zimbabwe, Uganda, South Africa, DRC, Malawi, Egypt and Nigeria.

Robin has an Honours degree in Economics and Accounting from Bristol University.

Mogens Schmidt has had a working relationship with Robin Vela and Lonsa for over 25 years.

Mogens is co-founder of Emerald Capital Management, a  London-based private equity sponsor targeting European small and mid-cap transformational growth equity transactions and he sits on the board of Verida Credit, a Romanian primary  mortgage institution funded by the US International Development Finance  Corporation in Washington DC (the former OPIC).

Before Emerald he was founding partner of the Argo  Capital Partners Fund 1 targeting growth equity transactions in Africa, East Europe and Central Europe.  He executed US$150 million of equity investments across 10 transactions as both investment and operating  partner working intimately with portfolio companies beyond board roles navigating commercial and  operational opportunities and challenges.

His career in London started at Scandinavian Bank Group Plc (now Enskilda Securities) after which he  moved to strategy, profit improvement and restructuring consulting and also held several interim  management roles in these areas.

Prior to joining LONSA in 2004, Gaudencia held the position of Projects Associate of the African Management Services Company, a special purpose vehicle of the United Nations Development Program which was set up jointly in 1989 by the IFC and the World Bank. AMSCO’s primary mandate was to help African companies become globally sustainable.

Gaudencia holds an Advanced Project Management certificate from the University of Cape Town and a Diploma in Business Management from the London School of International Business.

Lonsa’s mission is to build and manage a sustainable, shared-value-driven business through unlocking the power of private enterprise to drive social and economic transformation while making a financial return. We are committed to advancing the interests of Africa and her people in line with the United Nations’ Sustainable Development Goals. 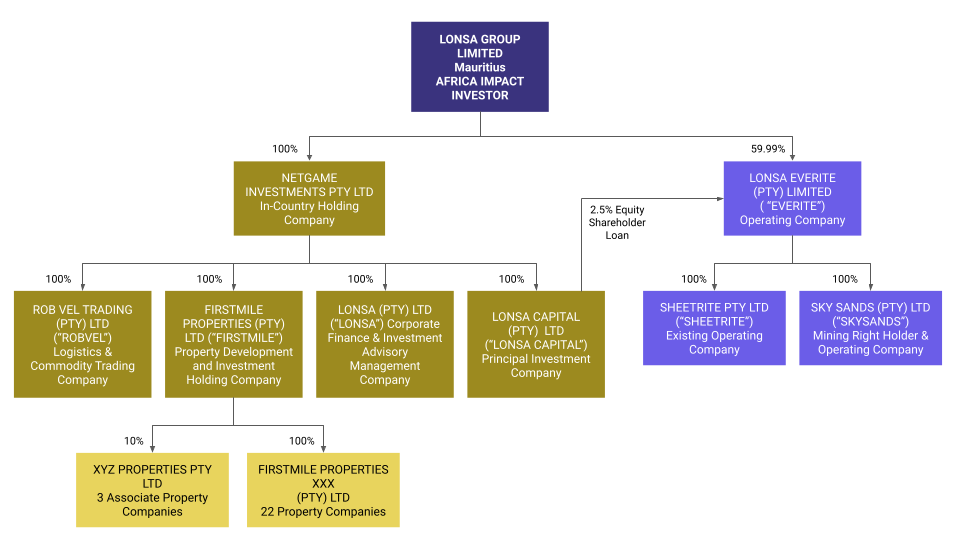